In this, the second in our series of articles on the recent legislative changes impacting on superannuation, we address the implications associated with non-concessional contributions.

These contributions are typically made from savings, investments or inheritances you have received and on which you have previously paid tax.

This is a useful way of building up your superannuation fund balance – particularly in the 10 or so years approaching retirement – as one downsizes the family home or has significant surplus disposable income.

Unfortunately, the amounts that you will be able to contribute have been significantly reduced (with effect from 1 July 2017) as follows:

In addition, a superannuation balance limit of $1.6m has been imposed – after which no further Non-Concessional Contributions may be made. (This is a complex area which we will address in a separate article).

It is evident from the table below, that on the basis that you had the funds to maximise both the concessional (over 20 years) and non concessional contributions (last 5 years), it may be possible for each spouse to accumulate total contributions in superannuation of between $990,000 and $1,125,000 by age 65. This does not represent your retirement balance as it excludes market growth and taxation. 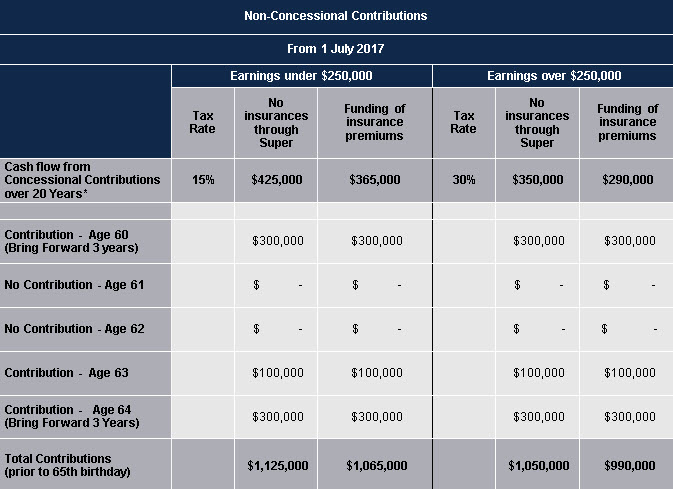 * From the table in our previous communication regarding changes to concessional contributions.

For most Australians, attaining a superannuation balance at retirement capable of funding a “comfortable retirement” over one’s extended life expectancy will be very difficult unless one has the liquidity to make these contributions.

With the legislated changes in mind, this tax year is the last year in which the annual $180,000 or the $540,000 ‘bring forward” non-concessional contribution may be made.

An example follows which serves to illustrate the complexity and therefore the risk that one might breach the caps – with associated consequences:

What is the maximum amount he can contribute each year over the transitional period?

Finally, it is important to bear in mind that the principal objectives for superannuation were:

It seems as if the latest legislation may have a positive short term impact – but a detrimental long term impact on government finances. Short termism is clearly the curse of our age – both in business as well as in politics.

Our next article will address the $1.6m contribution and balance transfer caps.